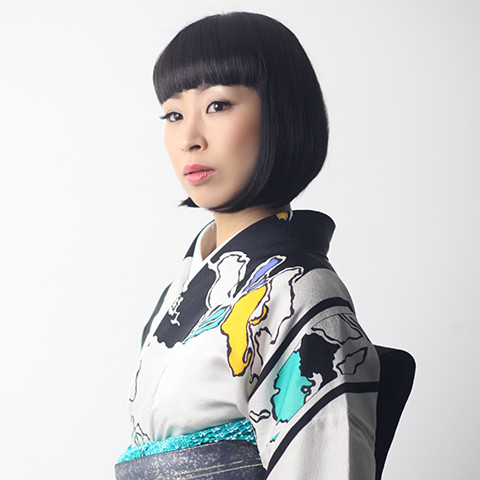 She started to sing from 6 years old under the influence of her father that he is a “Minyo” singer after that she won the “Noto mugiya national contest” and she is an various award-wining singer.

After graduated high school, she was apprenticed to Ms. Mitsue Hayasaka who is a Minyo singer for 2 years after that she released an album “Minyo of Aya Kagayama” from Japanese record label “Victor” .

Now, She study singing, Shamisen, Chinese fiddle and Japanese drum with her father and also she was apprenticed to Ms. Kisaima Kineya and studied Naga-uta (shamisen, Japanese drum) after that succeeded to the name as.

Recently, she started “Minyo Terakoya school” because she hope the children that don’ t know about Minyo get to know it. She is known as a memory keeper of Minyo.

She perform a concert entitled “Aya Moyou” from 2008 and she released 2nd album “Aya Moyou” .

Also she was awarded a prize of Hokkoku art prize and she play active roles in except for Minyo and she is expected to terrific talent based on Minyo singer.

We enjoy less listen to “Minyo” , because People forgetting “Minyo” that heal someone’ s soul, could be power, essence of life across the ages.

We hope young people and children keep to sing “Minyo” that perpetuate for a long time.

More importantly, I keep to sing “Japanese Minyo” and “Hakkutsu-Minyo” that my father made and I want to be a bridge for it to next generation.

That’ s my mission.